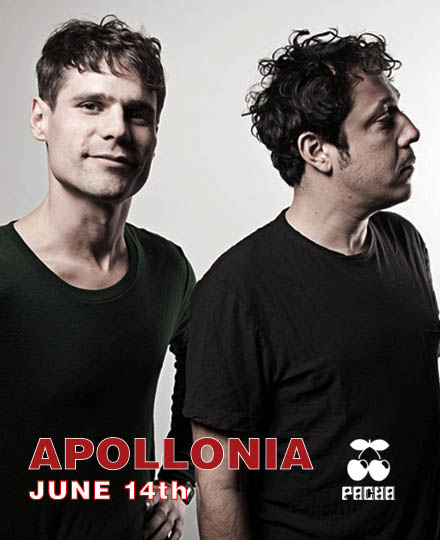 Sharing the same musical roots, tastes and creative vision, Apollonia was a natural, if not inevitable progression for Dan Ghenacia, Dyed Soundorom and Shonky. The label will serve as a platform for the trio’s productions, representing new beginnings based on a solid family that have already done much to shape the underground house scene, in Paris and beyond. “We’ll mainly focus on releasing our own music, but of course we are also really open-minded to sign any producers we all enjoy,” says Dyed..

Dan Ghenacia is the undisputed kingpin of the Paris underground scene and one of France’s hottest DJ exports, having founded and ran for seven years Freak N’Chic and now one of the three creative minds behind new label and b2b2b DJ outfit Apollonia.

Dan’s love affair with music ignited whilst spending a year in California in his early 20’s, soaking up West Coast house and psychedelia. On his return to Paris, Dan channelled this passion into a record selling business opening his own store Traffic Records, but as a true fan of the music he didn’t just want to peddle vinyl – he wanted to play it. Quickly gaining notoriety on the Paris scene with the infamous afterparties at Batofar, it was here he honed his distinctive techno-meets-deep-house sound, at the same time inspiring a new generation of DJs and first sharing the decks with later to become lifelong friends, Dyed Soundorom and Shonky.

With his intuition for raw talent and an ear for a killer track, Dan started his own label Freak N’Chic, breaking artists such as Dyed Soundorom, Djebali, Shonky, and even releasing the debut Jamie Jones EP. An unexpected dispute between the financial partners meant he was sadly forced to close the imprint in 2009, but ever determined, Dan only used this as an opportunity to refocus his artistic ambitions and take them to the next level… Apollonia was on the horizon.

Aside from Paris Dan has spent many summers in Ibiza, although initially “afraid it was going to be cheesy” he grins, DC10 won him over and he quickly scored a coveted residency there. Ten years on, Summer season 2012 saw him rock a prime-time Terrace slot almost every other week, and since the club entered ‘A New Era’ he has become an integral duo along with Dyed Soundorom for their b2b sets. Outside of the club Dan can often be found behind the decks at a villa afterhours or daytime beach party, getting deep into everything, warm, sexy and groovy, whilst giving you a history lesson in house and techno vinyl. Loving to play for hours on end, Panorama Bar, Berlin is another outlet for his extended sets, having once played for 12 hours b2b with Shonky before exclaiming “we could play 12 hours more!”

One of the most exciting and in demand DJ’s on the underground scene today, the DC10 resident has come a long way since his first days as a promoter in Paris to taking on the world with Apollonia.

On first stepping foot into the dark and mysterious world of Paris’ legendary Batofar after-parties back in 1998, Dyed knew he had found his calling. Taken by the 90’s West Coast house being majestically spun by then resident Dan Ghenacia, the pair struck up a friendship that would unfold into a longstanding musical partnership. Being given the honour of playing at the final Batofar party when Kwality came to an end, these afterhours undoubtedly shaped the music Soundorom makes and plays today – psychedelic, deep and above all else, groovy.

Gaining momentum with his first productions like Question EP and ‘Remote Cocktail’ on Ghenacia’s super cool Freak N’Chic label, it was his massive remix of Anthea & Alex Celler’s ‘The Playmaker’ that set dancefloors around the world alight. Naturally it wasn’t long before his favourite club came knocking on the door and Dyed scored a residency at DC10 Ibiza, playing the infamous Circoloco Mondays. Fast forward a few years and Soundorom is undisputedly one of the integral sound-makers of the party, often playing b2b with Ghenacia, opening and closing the summer season with their unforgettable sets.

Having released on the likes of Tsuba, Adult Only, Crosstown Rebels, Real Tone, and remixed for Culprit and Wolf + Lamb, it’s no surprise Dyed has been invited to play at many of the best parties around the world – Panorama Bar Berlin, Womb Tokyo, Robert Johnson Frankfurt, Louche Leeds, Dimensions Croatia, as well as Rex Club Paris where he hosted his residency, playing with guests like Mathew Jonson, Kerri Chandler, Jamie Jones, Maayan Nidam, Onur Ozer and Tobi Neumann. Soundorom made such an impression that in 2012 the club chose him to mix their third ‘Rexperience’ compilation, as did DJ Mag, who produced his preview mix CD ahead of playing the huge South West Four Festival in London.

Being into club music since his tender age, Shonky graced the decks of a club for the first time in 1998 inspired by djs like Dan Ghenacia, Ivan Smagghe among others as a time when serious Parisian clubbers revolved around the Kwality parties at the Batofar. Since then hes been regular in key Parisian clubs like La Scene, Le Rex ou Le Nouveau Casino. Hes got nowadays a monthly residency Zip at La Fleche dOr with Terry and Dyed Soundorom. His international pedigree includes Deep in Madrid, City Hall in Barcelona, a Mental Groove party in Geneva etc…

Shonky released his first production through FreaK n Chic in 2005, Let Me Ask U a tongue-in-cheek non sense clicky song about a lost soulmate (or maybe not) and his new production work are ready to be released in Sept 2006 through Sub Static and Resopal RED. Shonky is also developing a production partnership with Jennifer Cardini including remixes for Mobilee, Crosstown Rebels and Microfon. They have just finished their first original co-production for Mobilee.