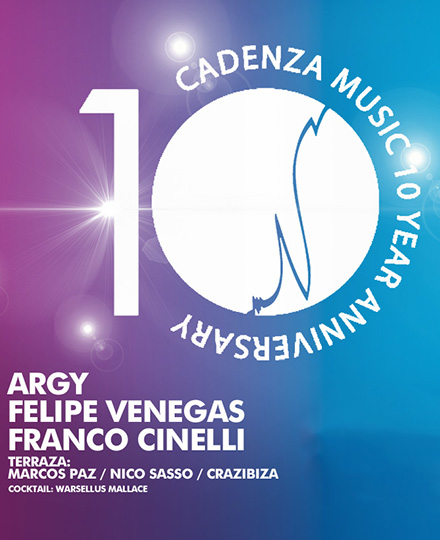 Cadenza is a space for music to grow, rise and blossom.
It is an accessible platform created to receive new people, projects and their influences. By continuously searching and progressing, we are a part of the evolution. We are all spiritual people, free as our music, and we live for that reason.

Through the good times and the bad, Cadenza now boasts a truly diverse international roster of artists, from Reboot to Technasia, Kenny Larkin to Argy, Mirko Loko to Michel Cleis, and many more – all of who capture the often spiritual, but always grounded electronic dance sounds of the past, present and future.

Electronic music producers are unique individuals with the skills, tools and ideas necessary to imagine, write and produce transcendent music. Some are more than just musicians through; they represent a way of life that embraces innovation, technology, and communion through sound. They share it, travel it and some simply live it. Argy, aka Argyris Theofilis, born of Rhodes, Greece, is one of these rare artists – perhaps even the epitome of this way of life.

Utterly dedicated to his work, Argy’s passion bleeds through in everything he does, from interviews and conversations to creating deeply musical, yet strikingly state-of-the-art house music. Just 25 years old, the Berlin-based artist is already among the elite of the underground club scene. He seized the spotlight with the massive 2005 hit Love Dose, duly remixed and championed by Luciano, and hasn’t stopped since.

Felipe Venegas has cemented his reputation as one of Chile’s finest DJs and producers. Now the 30-year-old joins the Cadenza family on its mission to ignite the dancefloors of Europe and beyond.

Felipe studied classical music and theory at university in Santiago, but his true musical education took place outside the classroom, in clubs where the likes of Luciano, Dandy Jack, DJ Adrian and Ricardo Villalobos were creating a new culture of sound. Felipe spent his weeks studying Beethoven and Stravinsky, but at the weekends he escaped to the underground electronic music scene, soaking up the spirit of techno, house and acid. Before that, he learned the essential relationship between music and movement from his dancer father, who taught him the timeless rhythms of salsa and rumba.

Franco Cinelli was born in Rosario, Argentina in 1978. He’s one of the most well known techno DJ/Producer in Argentina. Being just 14 years old, he started his djing career. Interested in drums, he started to research about creation and development of music thru computers and samplers. In 1995, inspired by the sounds of Detroit, he made his very first tracks. As the years were going thru, Cinelli was gaining experience, and became a key player in the argentine scene. His DJ sets are an harmonic blend between different styles rounded by a flawless mixing technique. In Argentina, he played in almost every important club around. Being also one of the residents of El Sotano, one of the best clubs in Argentine scene.