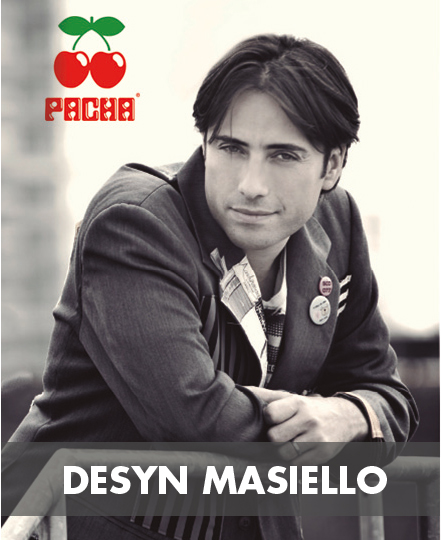 Desyn Masiello: A name now synonymous with the most cutting edge dance music from all corners of the world. He has a style that is constantly evolving and pushing barriers… having already caught the ear of some of the worlds largest DJs (Deep Dish, Sander K and Danny Howells nominating him as their ‘future DJ Hero’ in DJ Magazine’s Top 100 poll).

The strong force in Desyn’s sound enables him to stand out from the crowd. With many established DJs and nucomer DJs leaning towards a particular style and musical range many are pigeon holed into a ‘genre’ of music. Desyn, however, has managed to establish a sound that crosses boundaries and making his sound impossible to categorize. “I listen to as much music as I can as often as possible… all different types and genres…. From everything I hear I take what I think is the most suitable and meaningful to me; through DJ’ing I join the music into an orgasmic experience for the listener. Orgasmic is a somewhat strange way to describe what I do – but its descriptive. You see with my sets, at first I excite, building them up slowly, teasing you on the way… banging you hard at the end making you explode!”

Since his beginnings as a professional dj, Martin Garcia‘s artistic evolution was mainly lead by the British dance music industry, which he slowly incorporated and adapted to the local scene. After playing different clubs in Buenos Aires, his sessions at internationally acclaimed Clubland nights at Pacha made him acquire a weight of his own. From that moment on, he”s played many times alongside Sasha, Nick Warren, Jimmy Van M. and Danny Howells, among other artists. A smooth mixing technique and the details of his sound selections have gained him a huge recognition from the great number of progressive house fans along Argentina and Latin America. A success he’s also achieved as a producer, either individually or together as a powerful duo with Hernan Cattaneo, releasing on such labels as Perfecto, Shinichi and Bedrock. In 2005 Martin was the first guest dj at London’s Kiss FM and he entered number 50 at DJ Mag’s ranking. November and December saw him touring with John Digweed around South America, where he”s played many times before in Peru, Brazil, Chile, Uruguay, Paraguay and Colombia. Present each year at Creamfields Buenos Aires’ line up, he’s usually a headliner in such events as Moonpark parties and 1Live! In 2006 he’s already played East Fest Punta del Este, Uruguay”s glamour summer spot, Southfest’s third edition (he played the first one too) and he also made his debut at Miami’s Winter Music Conference with a memorable back to back with Hernan Cattaneo and a special set for Frisky Radio. When not working on his music (or involved in other artists productions as in Renaissance”s Hernan Cattaneo Sequential), Martin plays his distinctive progressive, electro, breaks and house blends in clubs across the country and through his weekly Journey show on Metrodance