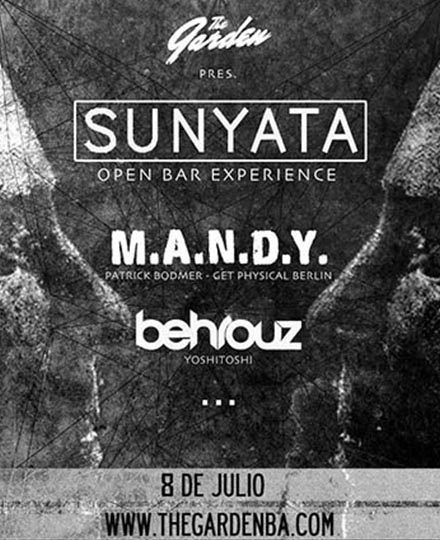 The pair readily indulge this curiosity by toying with various clever possibilities, including Me AND You, but the truth is likely a giggle under each of their talented breaths. P and P have carved a unique niche in electronic music by consistently selecting productions that induce their audience into a somatic frenzy. On the platform of their aptly titled Get Physical label, M.A.N.D.Y. has achieved massive success in colluding to create music that simply makes bodies move. Their foot stamping, hair flying passion is the ultimate expression of a dance music phenomenon for many years.

When M.A.N.D.Y. and Booka Shade joined as musical soul mates with DJ T., first in Frankfurt, then in Berlin, Get Physical produced a caliber of electricity that rippled throughout the EDM community and into the relative mainstream. Philipp’s charm and savvy, Patrick’s allusive artistry, DJ T.’s killer entrepreneurial sense and Booka Shade’s collaborative genius combined to form a masterpiece of intelligent design that reflects romantic sensibility and technical virtuosity. Together, they push the boundaries of dance music to compile an enviable arsenal of electro kissing house while caressing disco and flirting with techno. Body Language was the ubiquitous hit of 2005 and M.A.N.D.Y.’s Fabric Series three years later cemented their reputation as two of the most captivating selectors on the planet. One of their most recent prestige was a complication for Renaissance in 2009 which was met with tremendous accolades and described by Resident Advisor as “maturity, smarts, and cohesion…that is rare these days.”

In today’s world which has become infiltrated with DJs, you find a select few DJs like Behrouz who have managed to reach that top echelon, either through hard work and determination, support from fans and peers, and those that just have that God given gift to rock rooms (be it small or big) around the world for 10 or more plus hours, taking listeners on those unforgettable journeys of different genres of dance music ranging from deep house all the way to techno.

Welcome to Behrouz’s world… From his early days growing up in San Francisco, when San Francisco was considered at the time, the best city in the US for house music and still till this day lives up to its crowning title, you can find some of the best underground clubs. One DJ in particular was chosen to be the main resident DJ for two of the best known clubs at different times. Behrouz held a residency at DV8 for eight years and another eight years at 1015, and the man paid his dues by rocking both rooms each week to a packed house of clubbers ready to dance from open to close and where the motto was always “it’s all about music….”