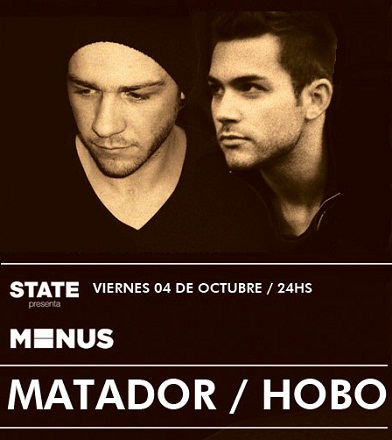 The Matador Project was set up in December 2006 by Producer/Engineer/DJ “Gavin Lynch”. This guise was simply intended for the writing & release of work created in the early hours…Nightworks, this time being when production is at its most natural for the ‘Matador Sound’.
These early productions often went back and forth as they were road tested at various dj residencies in Dublin, ‘515@Tripod’, ‘Acii Disco’, & the infamous ‘Mixed Salad’ parties. These nights & parties would pave the way, stimulate & energize this project & sound in a huge way for the years to come…..
Trained as a chef, sound engineer & music producer, Gavin has found his place comfortably in any creative environment, and takes great pride in the work & ethics involved. The journey into techno first began when listening to early dj compilations, ‘Dave Clarkes World Service’, ‘Richie Hawtin’s Decks Efx 909’ and various others. These 2 particular mixes retained amazing tracklists & from listening to them over & over, whilst sourcing the singles on vinyl, production & engineering was the natural course to take. Understanding, educating, consuming, growing, with time & energy…
Having worked and experienced many studio environments, Gavin is now based in Dublin Ireland in his own production studio where, day to day, night to night, music is being created, drums processed, sound designed & tracks completed…
From the early success of his remix of ‘Perc – Work Softer’ which gained the support from top industry leaders, Gavin has gone on to a string of Releases & Remixes on some high end prints including; Trapez, Cocoon, 1605, Rekluse, Harthouse & many more…
More recently Gavin has been welcomed into the Minus family with a stellar remix of ‘Bryan Zentz_D-Clash’ on Plus 8, and his ever popular ‘Kingswing Ep’ on Minus. Both of these projects have been widely supported and have seen fantastic chart success.
Building on some solid production foundations & great live shows, this project continues to evolve & surprise with each week that passes…..keep watching…..
“Deep, Dark, Chuggy, Warped, Trippy, Driving….once its interesting…..im on it
For more information visit Matador´s Facebook

The Canadian Joel Boychuk has chosen Hobo stage name, which in English means wanderer. And he has done it every time he enters the studio trying not to repeat the same way ever, not retrace his steps and discovering new musical spectrums. It’s those who say that “if you stand still, you get left behind.”
His early electronic music are like epicenter southern Canada and the city of Detroit. With its inclusion in the catalog of M-nus, get inroads in the electronic scene. As a producer, in 2009, achieved his greatest hit, Symptom, included in the EP Trackz published in M-nus and was reconcido by Martin Gore (Depeche Mode) as one of his favorite subjects. So far it has 3 Eps Complete the hallmark of Richie Hawtin and while still working on new sounds, Canadian continues to show his music around the globe either alone or alongside label mates.
For more information visit Hobo´s Home Page