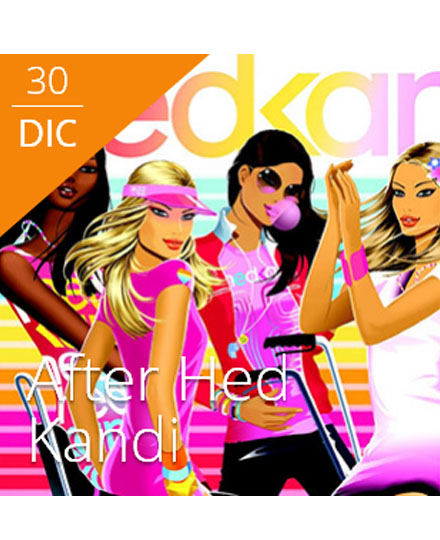 Hed Kandi is a UK-based record label and a music brand established in 1999 by Mark Doyle and specialising in Nu-Disco, a romantic variety of disco-box house music. Hed Kandi’s catalogue includes both artist albums and various genres of club compilations. As well as producing music albums and compilations, Hed Kandi hosts events all over the world. From its well-known Saturday night parties in Ibiza to pool parties in Las Vegas, its distinct brand of upbeat house music, often accompanied by a live saxophonist and percussion player, can be found in several parts of the world.

Hed Kandi originated in 1997. Mark Doyle had already been running the jazzfm label and had released 2 compilations that did not really fit with the jazzfm sound (Nucool 1 & 2). Management asked if they could continue this style of music, but not directly linked to jazzfm records. Mark Doyle created the Hed Kandi name, chose and the illustration-based identity with the contributions of illustrator Jason Brooks. The label became its own entity and (still wholly owned by jazzfm) began growing to the current scale of operation. Within a few years Hed Kandi managed to put the whole station in profit for the first time in 10 years. Compilation releases included Beach Angel, Serve Chilled, Winter Chill, Back To Love, Disco Heaven, Disco Kandi and Twisted Disco, There were also artist albums by 45 dip, Afterlife and Anthea

The brand was further promoted by radio shows on jazzfm & Galaxy.

Fierce Angel began touring overseas first of all with parties in Amsterdam and Berlin and then launched its club in London. The first party, at Rouge, attracted over 3000 people to a 1000 capacity venue. Shortly after, Fierce Angel moved to Pacha London and still holds parties at the venue.