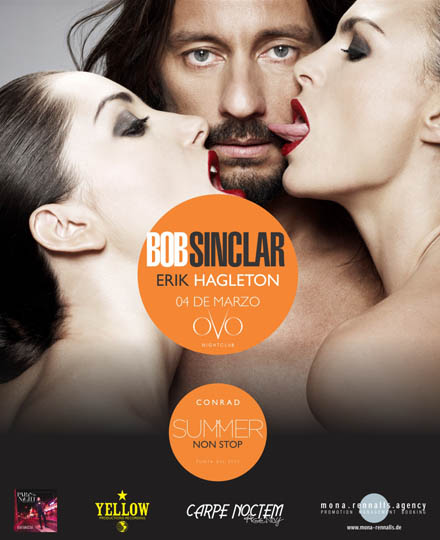 It’s also rumoured he was roped in to teach John Travolta to dance for Saturday Night Fever, but we don’t want to play with the rumours – the mere facts themselves are incredible enough. Now, since his autobiography was banned world-wide for in order to protect NATO security, Bob has decided to tell his story via the medium of house music.

Hang on a minute… This morning more than a thin tissue of propaganda, disinformation and downright fibbery. Don’t believe a word of it. Bob is a figment of the imagination of “Chris The French Kiss” the 31 year old Paris DJ behind club hits like “Gymtonic”, “The Ghetto” and the recent smash “I Feel For You”.

Bob grew up and still lives in Le Marais, thehappening gay quarter of Paris. “It’s the centre of Paris”, he beams, “a bit like Notting Hill in London. It’s got The Force”. Growing up there it is unsurprising that the teenage Chris soon started hanging out at Paris exclusive late 80s club scene.

“I was into music from the first time I saw a DJ play two records together at Le Palace. It was the happiest time of my life : hearing Todd Terry “Can You Party” and Eric B and Rakim, “I Know You Got Soul”, “So I got into hip hop”.

In 1994 Chris started the influential Yellow Productions, with his friend DJ Yellow. Signing artists like Dimitri From Paris, they were the first French label to branch out into the funky disco groove that we came to recognise as the mid 90s French sound Even then, image was all important. “We were fans of labels like Blue Note, Prestige and Mo Wax. We wanted to have a beautiful image too, but with a French twist”.

By 1998 he was moving away from acid jazz with his own Bob Sinclar project and released his debut LP on Yellow, causing dancefloor hysteria with the Jane Fonda – sampling “Gymtonic” and the deep soulful groove of “The Ghetto”.

Now, two years later with “Champs Elysées” he’s moved on to a more sophisticated sound that’s aiming for more than just dancefloor popularity. “The first album was just a set of tracks”, he admits now. “I hurried to get it out. It was not thought out as an album. This album I did over one whole year from A-Z”. And it shows.

Parisian born DJ/producer/groove extraordinaire, Erik Hagleton dishes up a dynamic mix of house and tech house, while emerging as part of the next generation of artists to take dance music to a new level. As the newest member of Bob Sinclar’s Yellow Productions crew, Erik dedicates his life to creating unique rhythms and delivering captivating sounds to dance floors worldwide. To Erik music is euphoria, and this joy is clearly manifested through his remarkable performances and releases.

Having begun his early DJ career in Amsterdam, Erik quickly unearthed his passion for house music and took his natural talents back to his hometown Paris. There, under the name Master Dam, he held a solid six-year residency in the legendary Parisian dance club, Redlight, where he launched the notorious Satisfy party. He then landed two of Europe’s most coveted residencies: Radio FG France from 2006 to 2010, and Ushuaia Ibiza Beach Club during the summer of 2009. In addition to the demands of his DJ-ing, Erik also evolved into an accomplished producer, starting his own record label Epoxy Music in 2010 to showcase his unique and sexy sound. It was not long before his talents were discovered, in 2012, by world-renowned DJ/producer Bob Sinclar, who signed him onto his Yellow Productions label.

Erik’s cross-cultural musical exposure expands as his journey brings him to the USA. Now living in Los Angeles, he continues the excellent work with Yellow, releasing his lastest track “Together Forever” under the Africanism project. Ready and eager to take on new and exciting musical adventures, nothing can stop this rising star.