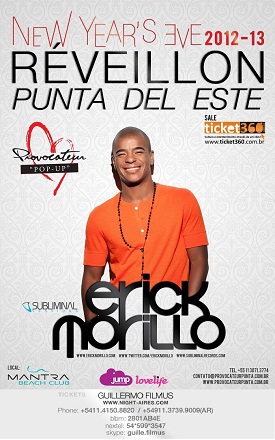 Erick Morillo (born 1971 in Cartagena de Indias, Colombia) is a Colombian-American DJ, music producer and record label owner. Having produced under a number of pseudonyms, including Ministers De la Funk, The Dronez, RAW, Smooth Touch, RBM, Deep Soul, Club Ultimate and Li’l Mo Ying Yang, Morillo is best known for his international work in house music, in particular for the label Strictly Rhythm, and the 1993 hit “I Like to Move It”, which he produced under the pseudonym Reel 2 Real, and which was featured in commercials, movies and ringtones, and his label Subliminal Records is one of the most renowned record labels on the house scene, particularly in the US.
Morillo was raised in Dominican Republic and Union City, New Jersey, where he attended grammar school at Saint Joseph and Michael’s School, a private Catholic school, graduating in 1985. He graduated from Emerson High School in Union City in 1989. His childhood musical influences include exposure to Latin rhythms, reggae, and hip hop.
Morillo began his DJ career at age eleven, DJing on the local party circuit, and paying his dues by “spinning” at weddings for family and friends. After seeing television commercial ad for New York City’s Center for the Media Arts, Morillo enrolled at the school to learn audio engineering. While working at a club in nearby Weehawken, Morillo met Latin reggae star El General, with whom Morillo became friends. The two collaborated in 1992 on the single, “Muevelo”, a mixture of reggae, house music, and a sample of T99’s techno single “Anasthasia”. The single went platinum, and Morillo’s records and remixes became familiar staples of Latin club music.
Morillo decided to branch out musically, and became friends with a then-unknown singer-songwriter Marc Anthony, who introduced Morillo to his partner on the 1992 house anthem “Ride On The Rhythm”, Little Louie Vega, who advised Morillo to focus on vocals