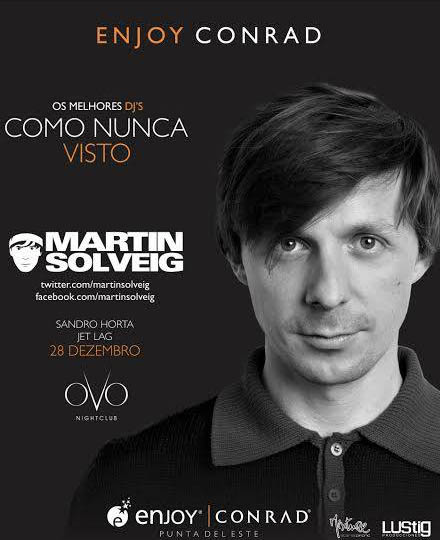 Martin Solveig is a focused artist, hungry for experience. His first DJ sets (a few nights on the decks of the Palace club when he was 18) inspired a passion for electronic music and an ambition to make a career in this fascinating, elusive little world. As a student, he was successively resident DJ at Le Palace, Les Bains-Douches, L’Enfer and Le Queen. Assembling disco classics and “Guem” and “Carneiro” percussion, he soon learned to put together small, very simple pieces and produce his first samples…

… Martin’s first production efforts were persistent, but inconclusive. Then, with the backing of friend and mentor Claude Monnet, he set up his own label, “Mixture”, and finally made his name with “Heart Of Africa”. This piece of percussion enlivened by raging saxophone riffs won acclaim from influential electro players, such as Joe Clausell, Frankie Knuckles and Bob Sinclar. Sinclar, who had just launched his “Africanism” project with DJ Gregory, asked Martin to join the team. The result was “Edony”, Martin’s first hit, which sold 40,000 copies in vinyl. A surprising track, telling the story of an Egyptian princess over a derbouka backing, it reached the number-one spot in the French, Italian and Greek club charts.

Martin never lets his producer’s cap get in the way of his DJ headgear. An artist endlessly roaming from venue to venue, he performs his music on the decks, touring clubs worldwide. The 2004 Rocking Music Tour took him to more than 20 countries. In Sydney , New York , Ibiza , Singapore , Barcelona , Zaghreb, London , Lisbon , Dubai and Paris , at events ranging from a private party for Karl Lagerfeld to the open-air festival of Carthage , Martin found unswervingly enthusiastic audiences, often displaying different sensibilities.