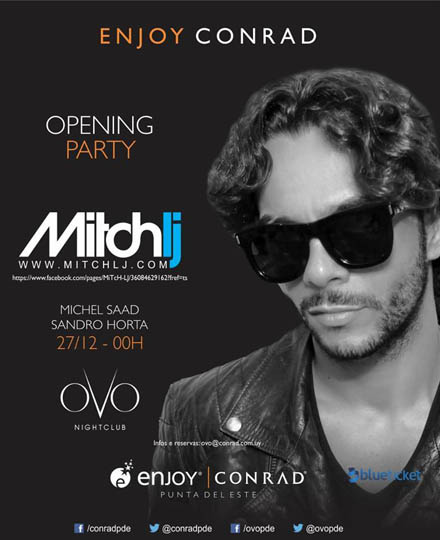 MITCH LJ, born Michel Saurin, grew up in the South of France in an environment that truly fostered his artistic inclinations. At the age of 5, he began learning jazz piano and saxophone, improving his skills with 20 years of drums and percussion.

MITCH started his DJ career in 2000 in St Tropez, his sets were so appealing he quickly became one of the most desired DJ throughout Europe and the United States. An art of mixing house music, in a seductive way offered him a notoriety among true jet set elite and music fans.

Mitch has also worked closely with major artists such as Kaskade, Axwell, David Guetta, Avicii, Tiesto, Steve Angelo, Dirty South, Paul Van Dyk… The list goes on and on. Now MITCH LJ has set his sights on producing and remixing, releases out on Ultra records and Strictly Rythm such as « Beiramar », « As much as i do » or remixes for Kaskade and Late night Alumni « Shine ».

From private parties to renowned international venues, MITCH LJ is coming from New York City with the best house selection, mixed with the unique epic Brazilian touch, to rock the dancefloors… GET READY !