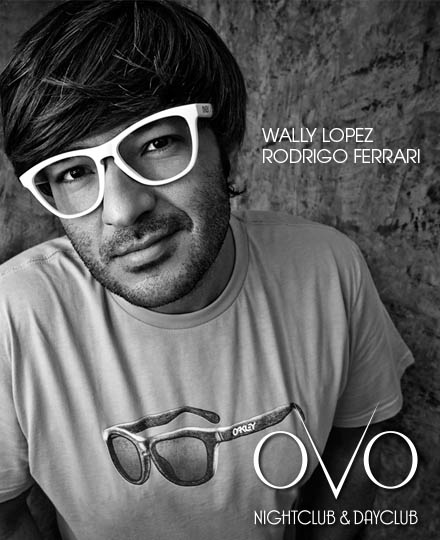 Born in Madrid, San Blas, 1976; A perfect way to start a Biography on Wally Lopez; Today’s DJ, without a doubt, Tomorrow’s. His career has always been traced to move up and forward; before anyone else he remixed for House figures such as Tiësto, Dirty Vegas, Bob Sinclar, and David Guetta, this last one helping him achieve his first number one hit worldwide; “Just a Little More Love”, he has been acclaimed by the most charismatic places in the world, obtaining his residency at Ibiza; currently at Space every Wednesday…This promising career has led him to participate in Gigs along with Madonna, Ricky Martin, Miguel Bosé, and many others…

A figure of the Media, obtaining recognition in many categories, sponzored by international brands such as: Oakley, Pioneer, Red Bull, RoomMate Hotels, and previously Vueling and Absolut…He has been capable of converting Eyeglasses into a Worldwide fashion and his personal icon (Oakley Frogskin), converted a bottle of Absolut Vodka into a worldwide known track “My Absolut Track”, he made music during two summers for the famous flight “I’m Vueling To Ibiza”, became the exclusive image of Pioneer throughout all Latin America…

Founder and Creator of the clothing Brand “Tremenda Wear”, “Tremenda 2.0” concept, “Factomania”, and “La Factoria”; his weekly live radioshow which is heard by more than 700.000 people on Maxima Fm and followed by more than one million fans in the social network.

We could talk about all his awards and recognitions nationally and worldwide; He is the only Spanish DJ included in the Top 100 DJ’s of the British DJ Mag, he is the only Spanish DJ who has done two “Essential Mix” on the BBC1, he performs over 150 gigs annually worldwide, and we can’t forget all his recompilations and productions published by the best labels on the market…

Now we just keep in mind that Wally Lopez is, and will always be “Today’s DJ, without a doubt, Tomorrow’s”…Charisma & Quality.
Wally Lopez 7.0 Coming Soon….