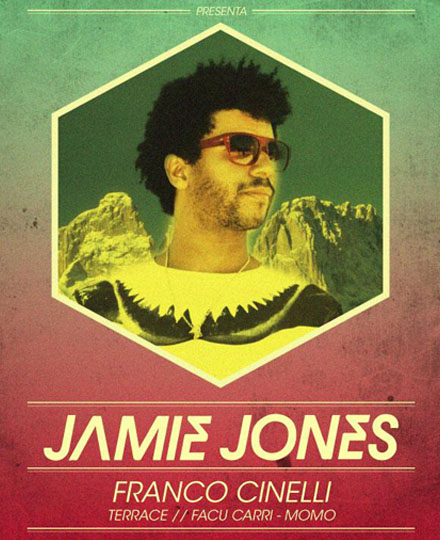 Jamie Jones and his label, Hot Creations, have been credited with creating an iconic sound that has paved the way for a warmer, more melodic, deeper side of techno to emerge.

Widely regarded as the leader of the new sound of house, Jamie Jones is renowned for his pioneering music; his cross genre band, Hot Natured; his ground­breaking label, Hot Creations; and his world-renowned event series, Paradise.

In less than a decade, he has atapulted himself to stardom by shattering genres and breaking out of the confines of minimal techno.

Jamie’s revolutionary sound is an instrumental part of his success, being both artistically innovative and yet easily accessible.

He and his label, Hot Creations, have been credited with creating an iconic sound that has paved the way for a warmer, more melodic, deeper side of techno to emerge. 2011 was the year that Jamie and Hot Creations

took over. Continuing to power out hits, they released Hot Natured’s “Forward Motion,” featuring vocalist Ali Love. But it was Jamie’s remix of Azari & III’s “Hungry for the Power” that was the quintessential song of the year; heard everywhere in Ibiza and beyond.In 2012, Jamie and Lee Foss evolved their project, Hot Natured, into a full band; adding Ali Love and Luca C as members. Taking elements of the grooves Jamie has long championed and forging them with song­ based vocals and smooth synth melodies into a live act, Jamie looked to challenge conventions with this new direction.

The first Hot Natured single, “Benediction,” reached the top 40 in the UK in 2013 and the debut album “Different Sides Of The Sun” continues to sell strongly six months after its release. In 2014, Hot Natured is viewed as one of the most in-­demand electronic live acts globally.

Franco Cinelli was born in Rosario, Argentina in 1978. He’s one of the most well known techno DJ/Producer in Argentina. Being just 14 years old, he started his djing career. Interested in drums, he started to research about creation and development of music thru computers and samplers.

In 1995, inspired by the sounds of Detroit, he made his very first tracks. As the years were going thru, Cinelli was gaining experience, and became a key player in the argentine scene. His DJ sets are an harmonic blend between different styles rounded by a flawless mixing technique.