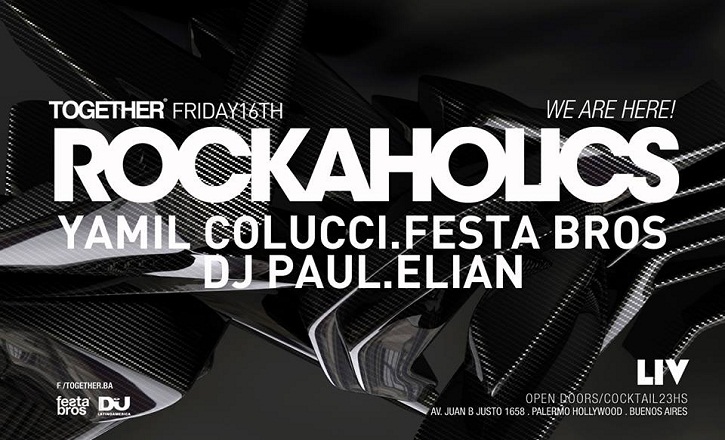 If you want to start your weekend in the best way you can, Liv Buenos Aires is one of the best choice for friday nights. If you like your nights out to be full-body expirience – light on conversation and heavy on house music and people watching – Then Liv´s Friday event, Together ®, with the best house music powerd by DJs Festa Bros, who have been influenced with the sound of artists like Frankie Knuckles, Danny Tenaglia, y Danny Howells should be just your best choice.

Festa Bros is the duo formed by Nicolás, born in 1978, and his brother Agustín, who is three years younger. The family background marked their career forever: they grew up surrounded by an exclusive collection of disco and funky music that during adolescence sparked their interest in the activity they are currently engaged in.
In 1995 they started getting involved in the scene, playing at pubs an
d clubs. Influenced by the sound of great artists such as Frankie Knuckles, Danny Tenaglia and Danny Howells, they showed their tendency for house music. In 2004 they started working at the Metrodance 95.1 FM Music Programming Department in Buenos Aires. A year later they were programming music for their first own radio show called Sunday Beats and they were also invited for the first time to take part in Creamfields Buenos Aires, an annual edition in which they have been included ever since. In 2007 and 2008 the participated in two editions of Southfest Buenos Aires.
Supported by DJs such as Hernán Cattáneo, Nick Warren, Martín García, Tommyboy, John Creamer, Luke Fair, Deep Mariano and Guille Quero, they have been dedicated to studio and production work since 2005. That same year they released tracks under the British label CP Recordings and from then on they continued working with other record labels.
Since 2007 they have been playing in different places that included gigs in European countries such as England, Spain and Hungary and also in Latin American countries like Brazil, Paraguay, Peru, Colombia and Uruguay.
Nowadays, they distribute their time between their residency at Crobar, one of the most important clubs of the current scene in Buenos Aires, and their radio show ‘Brothers’, broadcasted every Sunday at 1 am on Metro 95.1 FM. With only little time left they successfully manage to work on the development of their own record label called Bend Brothers, together with Argentine producer Mercurio.
Visit Festa Bros web site