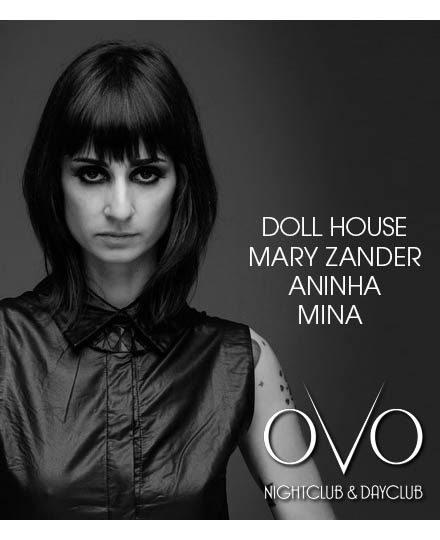 Giacomo Picchi and Michael Tognetti (Doll House) born at the end of the 80s, in a small village of Viareggio, in Tuscany (Italy).
Tuscany, with its green countryside, has undoubtedly influenced the sensory perceptions of the Two that, since they were kids,they are compared with flavors, smells and sounds of this beautiful region.

Dol House music, with its enchanting and mysterious melody, breaks powerfully into the daily lives of their first years of life.
Giacomo, grows between the mother’s vinyls, a great lover of dance and classical music, and between the discs of his father, experimental rock fans.

Michele, mature by shots of music theory and piano, a passion that will accompany him for about 10 years, in a musical journey of the utmost importance for his artistic training.

The endorsement of electronic music legends only confirms what everyone already knows: when it comes to the Brazilian female DJs, Aninha tops the list.

Aninha’s career began in the region today celebrated as “the Brazilian Ibiza”. Ten years ago, however, everything was different on the north coast of Santa Catarina. Madly in love with music – by her own definition – she gave up marketing school (“without thinking twice”) to devote herself to her true calling: give people unforgettable moments and deep musical journeys through designed grooves and mesmerizing basslines.

At that time, early 2000, times were different. Just a reminder of how music was consumed to conclude that, yes, a lot has changed. To buy records, for example, the DJs had to travel to São Paulo, or the privileged, to London. From her hometown Itapema, Aninha never let distance be a limitation to chase her dream. “All the money I earned, was to buy records. Then, as the internet was too slow, I called the stores in Sao Paulo and heard the tracks on the phone”, she recalls.

Discovered in 2003 at a party in Curitiba, in a short time has occupied the post of Warung Beach Club’s resident DJ, which had begun a year before an incredible journey that marked the history of Brazilian culture club forever. Aninha is part of this and other stories.

The first-lady of Rio’s house music scene Mary Zander, spins a contagious blend of deep & tech house. With over 10 years of djing experience and constant gigs all around Brazil, this charming Carioca has consolidated her name as one of the leading DJs of her country.

Performing in top festivals such as Rock in Rio (Lisbon), Skol Beats (São Paulo), Creamfields (Rio de Janeiro), Fiesta de la X (Montevideo) and South America Music Conference (Buenos Aires), her musical skills have made her a frequent guest at the “Made in Brazil” party at Avalon Los Angeles and at Bahrein and Pacha Buenos Aires.

Living between Brazil and Argentina for the past two years, Mary Zander is part of 3Plus Talent, Brazil’s most respected DJ agency, and is now on the Unlock Recordings rooster, a forward thinking musical label based in Buenos Aires.